Mark Inglis is known to many as the mountaineer who lost his lower legs to frostbite on Aoraki/Mt Cook in 1982, and went on to summit Everest and win a silver medal at the Paralympics. Nowadays, he is a passionate cyclist and cycling advocate who helps coordinate the biking trails around Hanmer Springs.

You’ll never find Mark Inglis legless. While the rest of us are swapping our bike shoes for brogues, Mark is donning a whole new pair of legs. He has many to choose from: legs for trekking, mountain biking, road biking, skiing, ice-climbing, carbon mountain legs and general standing-up-and-walking-around-in legs. Mark also has track-building legs and short, gardening ones so he doesn’t need to bend over. A pair of chainsawing legs are made out of aluminium, ‘because you don’t want to be cutting your leg off.

There’s less to cut off since 1982, when he and his climber partner Philip Doole were trapped in an ice cave for 13 days. Frostbite cost Mark both legs 14cm below the knee. That story and his subsequent exploits are now the stuff of legend, but what isn’t so well known is how important biking has been to him through the years.

Mark took up mountain biking while working as a search-and-rescue mountaineer in Aoraki/Mt Cook National Park back in the early 1980s. ‘Ski guides were bringing these fat-tyred bikes called Stumpjumpers, then the local bike store started selling the Healing Mountain Cat.’

Mark was already hooked by the time he had his ‘wee hiccup’ in 1982. During recovery, his stumps were so tender it was hard to walk. But he could still ride.

‘Since then, I’ve always been on the bike. It’s a way to get out and get fast without destroying my stumps. I call the bike my legs, because that’s what it’s given me.’

Mark beams with the positive power of cycling, especially for those with limited mobility. ‘It offers freedom of movement. It gives you elegance and flow. You might walk like a duck, but on a bike you can fly like a falcon.’ 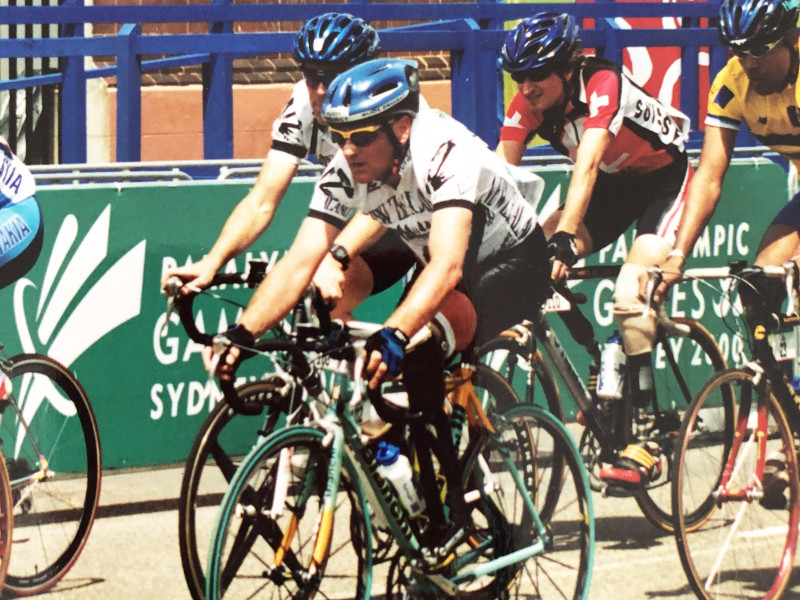 Mark competing at the 2000 Sydney Paralympics

And fly like a falcon he has. At the 2000 Sydney Paralympics, Mark rode one kilometre in 1 minute 23 seconds to win New Zealand’s first ever Paralympic cycling medal. ‘I was 0.2 of a second too slow for the gold, but fast enough for silver. I also got to ride on a 250m wooden velodrome for the first time, rather than the 400m asphalt one I’d be training on.’

By his own admission, Mark is a man who gets bored easily, which is one of the reasons he loves cycling so much. ‘When you’re on the bike you’re always finding something new.’

These days, most of Mark’s riding is done on the trails around Hanmer Springs where he lives with his wife, Anne. They moved to the town in 2002 after he gave up fulltime winemaking in Marlborough and was eyeing up the trip to Everest. ‘We came here for the mountains.’

Mark says he rides with the ‘ebike smile’ thanks to his Norco Sight VLT. ‘My friends say I went to the dark side, but I say I saw the light – and the light is powered by electrons! I can ride places I could never ride before.’

Since 2018, Mark has been manager of the Hurunui Trails, the organisation responsible for developing and promoting cycling and walking trails in around Hanmer Springs and the wider Hurunui District.

Mark says that it’s exciting times for local cycling. There are now 72 kilometres of trail around the town, including 40km of single track in Hanmer Forest which cloaks Mt Isobel on the edge of town. Designed and developed by the local track-building group, the forest trails are easy to navigate and are great for progression – there’s something for everyone from beginners upwards.

The Hurunui Trails Trust has ambitious plans to get to 90km of trail in the next three years, and secure Hanmer’s status as a ‘trail town’. ‘We’ve got the expertise and ideas. We just need financial support,’ says Mark.

In June last year DOC entrusted the Hurunui Trails Trust with management of the St James Cycle Trail for the next three years. 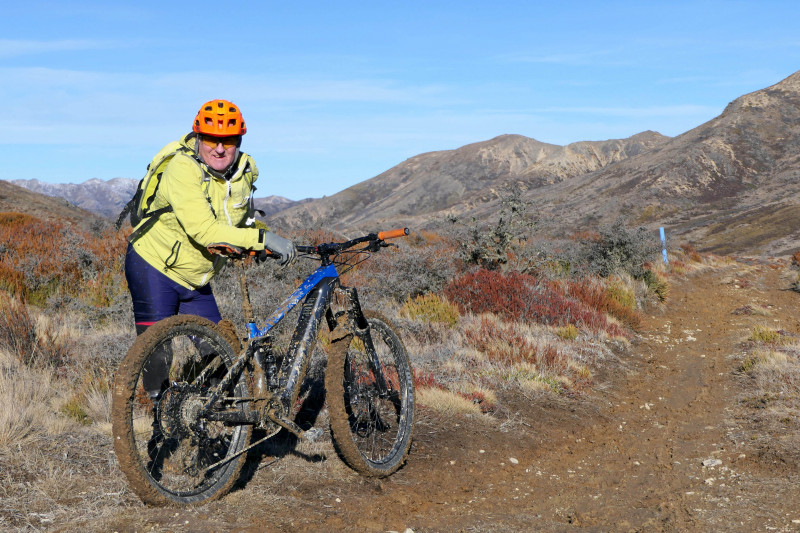 Although understandably biased, Mark rates the St James as one of the most impressive of the New Zealand Cycle Trail’s Great Rides. ‘You’re riding the big country,’ he says.

Opened in 2009 and just 15 minutes’ drive from Hanmer Springs, the trail is a ‘little bit of everything – a mix of 4WD trails and custom-built singletrack. It takes in epic scenery featuring Lake Tennyson, and the stunning Waiau River Valley, and the rustic, high-country romance of historic St James Station.

Eager riders complete the 59km in a day, while overnighters have the option of camping or staying in Lake Guyon Hut (19.5 km in), or the recently upgraded Pool Hut, around the halfway point. 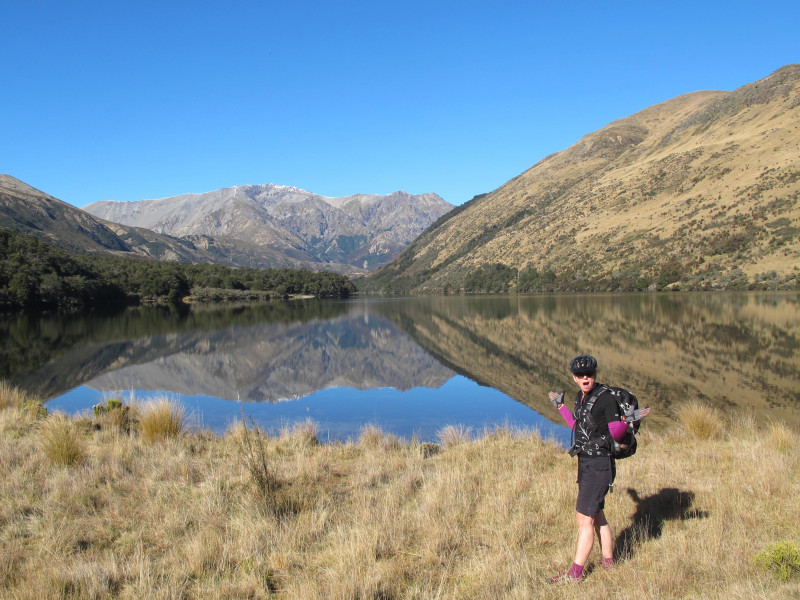 The mind-bogglingly beautiful Lake Guyon on the St James (bennettandslater.co.nz)

Amongst various trail upgrades in progress is remedial work to the Homestead Run Loop – a popular 15km day ride starting at the historic sheep station. ‘We’re currently upgrading it to make it four-season, and hope to build additional trail to make the whole loop singletrack. Fortunately it’s a great piece of trail design and exciting to work with,’ says Mark.

Another crucial connection is provided by the Hurunui Trail Heartland Ride. Opened in 2019, it’s a 205km road journey between Kaikōura to Amberley via the Inland Scenic Route. In future it will stretch all the way to Christchurch, and also connect with the new Whale Trail from Kaikōura north to Picton.

Such connectivity accounts for the area’s growing popularity as a vital hub in the exploding bike-packing scene. ‘So many of the top of the South Island’s trails feed into the Hurunui district. Last summer we saw more cycle-tourers than ever coming through town.’

Mark reckons Hanmer Springs is heaven for visiting cyclists. ‘Our trail town has so much more to offer, such as the historic hot pools, and heaps of great dining options and accommodation. Where better to have an adventure and then recharge your batteries!’

Mark recently featured on the POP! Pedal On Podcast; you can listen to it here, or on your favourite podcast app.

Read more about Mark on his website; the 2002 biographical documentary No Mean Feat can be viewed at NZOnScreen.com.