In spring this year a group of e-bikers aged 59 to 73 tackled the Tour Aotearoa’s North Island route – a 1700km epic taking 34 days. Funny thing is, they hadn’t even intended going on a bike trip.

The Franklins, Careys and Teales are three couples from Whangarei. Just over a year ago they started planning an epic walk through length of the North Island via the Te Araroa Trail. ‘But then we thought to ourselves,’ recalls Paul Franklin, ‘why don’t we do it by bike?’

And so they did. Christened the Organic Motorcycle Club by a local they met along the way, the team of five riders and one support driver completed 1700km of the Tour Aotearoa, the 3000km route of the biennial brevet organised by the Kennett Brothers. 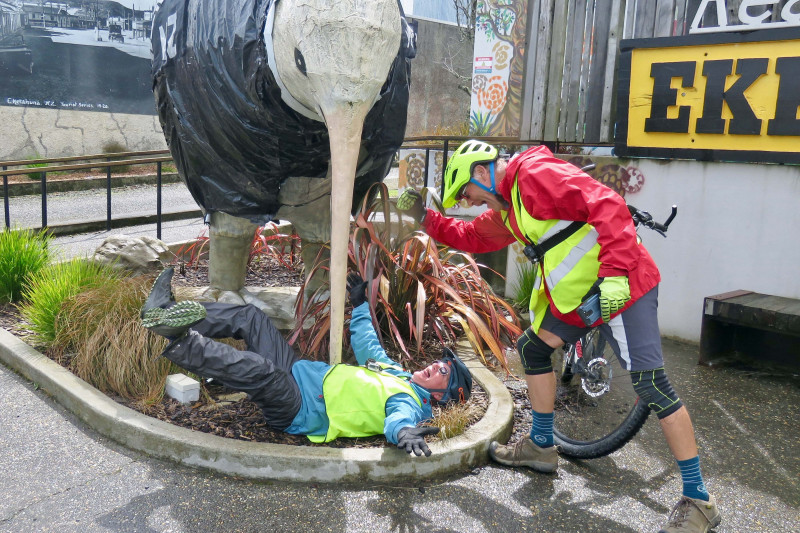 Warren is savaged by the local wildlife in Eketahuna (Wendy Carey).

Speaking to Paul (61) and his wife Karen (62) about their adventure, it is clear that they’re not the super-fit, bike-mad boomers you might assume them to be.

‘We only started riding the trails two years ago, when we got our e-bikes,’ says Karen. ‘Before this trip we’d never ridden further than 45km in one day. And we only did six weeks training before we set off.’ What’s more, Paul is a type 1 diabetic on an insulin pump.

Warren (73) and Wendy (64) Carey had quite a bit of mountain biking experience, while their fifth team member, Yvonne Teale (59), was a regular e-bike commuter. Her husband Eric (64) drove their support vehicle, a motorhome packed to the rafters with their gear. On the back was a trailer Paul built especially for the trip holding six bikes and a generator for charging the bike batteries.

After 10 months of planning, the ‘OMC’ set off from Cape Reinga on a journey that would take them on five of New Zealand’s 22 Great Rides and ten Heartland Rides, along with plenty of other off-road trails and quiet country roads.

Our intrepid organic bikers set off from Cape Reinga – only 1700km to go (Warren Carey).

Unsurprisingly, there was a little trepidation at first.

‘We were in reasonable nick when we set off, but that didn’t stop the first big hill near Waipoua Forest looking like Mt Everest,’ says Karen.

They soon settled into a daily rhythm, averaging 54km a day.

‘We were riding slowly enough to enjoy the scenery,’ Karen says. ‘We’d get to camp by mid to late afternoon, and by the next morning we’d be ready to go again.’

They admit that the going was tough at times. Challenges along the way included some tight switchbacks on the Waikato River Trails, and the tricky Arataki swing bridge near Mangakino where one club member ‘kissed the ground’.

The OMC didn’t deviate much from the Tour Aotearoa route. Heading south from Dargaville, they chose to ride around the Kaipara Harbour rather than taking the boat from Pouto Point.

They also skipped a couple of busier road sections, although they were generally amazed at how few cars there were the whole way. ‘All in all, it felt incredibly safe,’ says Paul.

Their timing also made for happy camping, with the group spending 27 of their 34 nights sleeping in tents. When the weather didn’t play ball, they opted for holiday park cabins, instead. 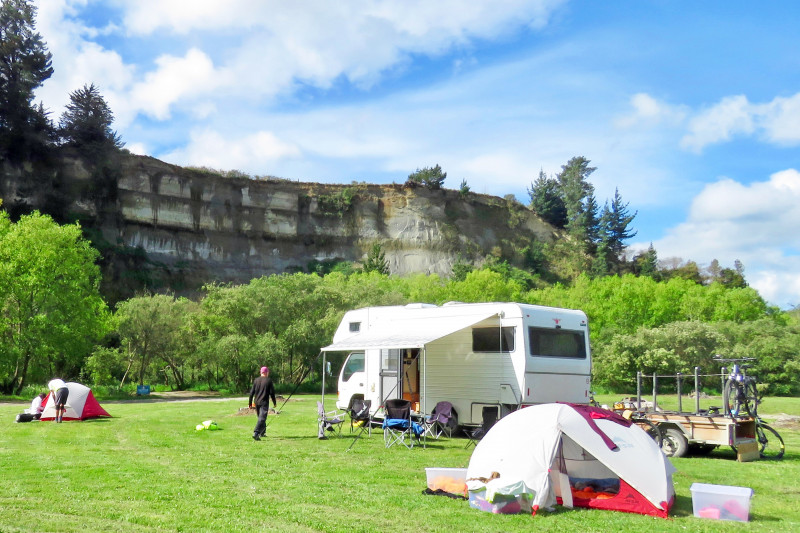 The weather was pretty good overall, the worst they encountered being the windy Wairarapa. ‘As we approached the Remutaka Cycle Trail at Cross Creek it was gusting up to 50 knots and literally blowing us off our bikes’, says Karen.

The hardest part of the trip, however, was over the hill in Wellington.

‘We got to the end of the ride and were sitting on the Wellington waterfront watching the ferry head off to the South Island. We just wanted to keep going,’ says Paul.

While their four companions drove home, Karen and Paul headed back north via the Northern Explorer train. ‘Passing through some of the countryside we’d just ridden through, on a journey taking just 12 hours by train, was just mind blowing.’

Fast forward a few weeks, the couple are still buzzing about their adventure.

‘Every day was different,’ says Paul. ‘The route took us through such a variety of landscapes.’

‘Riding along Ninety Mile Beach it was blowing a 30-40 knot tailwind and we freewheeled for 35km at 40km/hr. It was a rider’s dream come true.’ 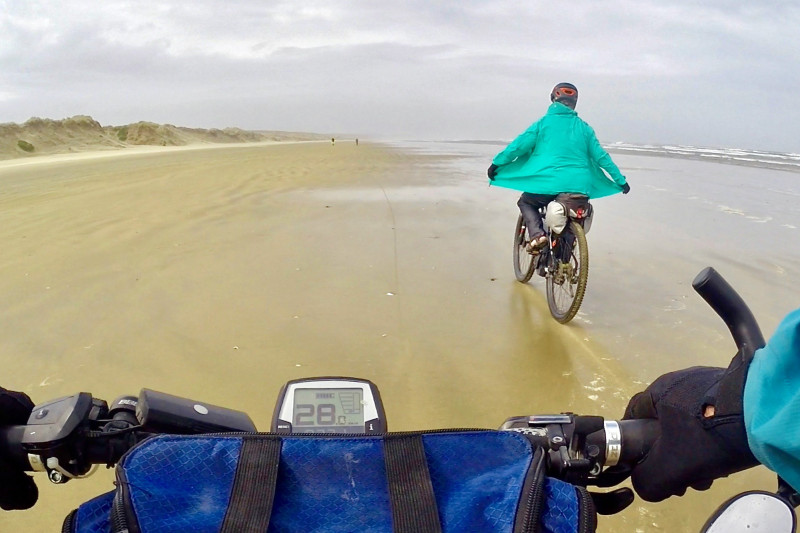 The route also took them to many remote sights, such as the Centre of the North Island hidden deep in the bush near the start of the Timber Trail. ‘We went down roads you never knew existed. Sometimes you had to ask yourself why they were even there!’

The people they met along the way also proved memorable. ‘We certainly got a lot of toots, and there was plenty of good banter with the locals. A woman we met at Pipiriki hilariously described us as doing the “Tour Aotearoa in slow motion”’.

In the end, slow and steady won the race. The OMC rode just over 1700km in 34 days with just three rest days. They had a lot of fun and got much fitter, the hills they’d been so worried about before they set off were now considered just ‘wiggles and squiggles on a map’.

Just as well. The Tour Aotearoa’s South Island route is even more challenging, and that’s where the OMC is heading next…

The OMC’s top tips for riding the Tour Aotearoa route

1.     A brilliant way to try a bit of bike-packing, the Tour Aotearoa route can be ridden all year round, with multiple access points allowing you to ride as little or as much as you want to.

3.     You needn’t be super-fit if you’re riding an e-bike. Karen and Paul only trained seriously for six weeks and say ‘ anyone can do it’. Consider yourself inspired!

4.     Be wary of taking too much gear. The OMC reckons they only used half of what they took. Check out our What to pack blog on the NZCT website.

5.     Taking a spare battery is a good idea, especially if you have any doubt about where you can charge up. The OMC only used their generator seven times due to the ready availability of places to recharge. Paul also rode almost the entire way in his bike’s ‘eco’ mode.

6.     Be sure to take lots of photos (and video, if possible). ‘Looking at them is like living it all over again.’

7.     A support vehicle is useful, but may not be necessary. The OMC reckons they’ll do some unsupported trips in future.

8.     That said, the support driving can be shared, allowing riders to take a break off the bike. The support driver can always ride shorter sections by doing return rides at the beginning and end of each leg – just as Eric did.

9.     A bike trailer for the support vehicle is valuable, allowing riders to avoid busier roads or skip sections for any reason.