Going with the flow on the mighty Clutha Mata-au

The Roxburgh Gorge and Clutha Gold Trails reveal stunning scenery and surprising stories along our most spectacular southern river.

The mighty Clutha Mata-au is New Zealand’s largest river by volume and one of the swiftest-flowing rivers in the world. It’s also the country’s second-longest, stretching 338km from Lake Wanaka to the Pacific Coast.

The first people to follow the Mata-au’s swirling blue waters were early Māori, who journeyed along it on their way from their coastal kaik (settlements) up to Wakatipu and Wanaka. From the 1860s, its banks teemed with gold prospectors who transformed its landscapes and laid the foundations of the communities lining the river today.

The Roxburgh Gorge and Clutha Gold trails are a great way to discover the stories of this special river while soaking up ever-changing scenery. The twin trails combine for a mostly gentle 94km ride between Alexandra and Lawrence, commonly ridden over 2–3 days or broken into shorter day rides. 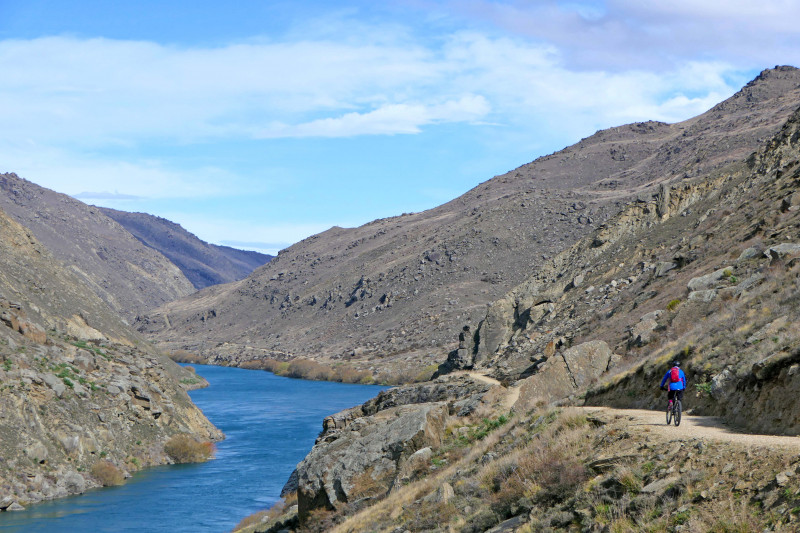 For those who’ve never seen it, the Roxburgh Gorge comes as an eye-popping surprise. From the stranded pillars of Alexandra’s old town bridge, the cycle trail follows the Clutha Mata-au into this otherworldly landscape of angular schist outcrops. Fragrant wild thyme clings to the rocky hillsides while graceful willows line the surreal azure waters.

The trail comprises 21km of wide, well-graded singletrack in two sections, with a gap around the middle bridged by a jet-boat ride. A highly memorable ‘must-do’, the boat trip is a chance to see a remote, little-known stretch of the river that few get to see. In a particularly isolated spot, the sight of Mrs Heron’s humble stone cottage will bring the toughness of the old-timers into stark relief. 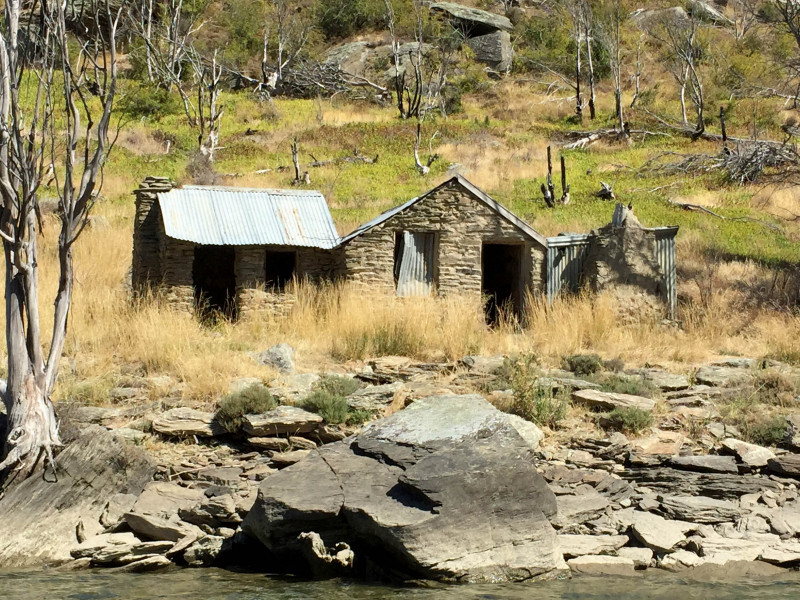 The Roxburgh Gorge Trail ends at Roxburgh hydro dam. At the foot of this striking construction – an elegant monument to the big dreams of a small country – the adjoining Clutha Gold Trail begins its 73km meander down the picturesque Teviot Valley, blanketed in idyllic orchards and farmland and backdropped by bald mountain ranges.

The past echoes through the years at heritage sites such as the Lonely Graves, Horseshoe Bend Bridge, and in Big Hill Tunnel and many other relics of the old Roxburgh Branch railway that the trail follows for much of the way. 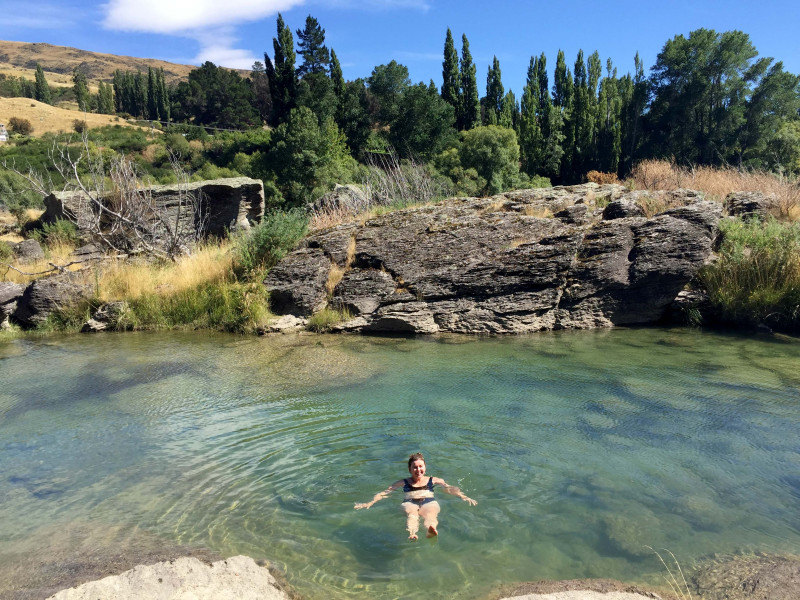 Keeping cool on a summer's ride along the Clutha Gold Trail (bennettandslater.co.nz).

Like many other New Zealand cycleways, it was the disused railway that inspired the creation of the Clutha Gold Trail. The man behind that idea was Roxburgh’s Rod Peirce, who wasn’t even much of a cyclist when the idea popped into his head.

‘My brother convinced me to ride the Otago Central Rail trail with him and his friends. About six months later I had a bit of an idea that we might be able to create a similar trail along our old railway line between Roxburgh to Lawrence.’

A ten-strong group of locals formed around the idea. Five were from the Roxburgh area, and five from around Lawrence. Rod says that connecting local communities was always a primary driver of the project, not just physically but in working together for the common good – from landowners, DOC, the council and other organisations, to smaller groups and individuals who have donated, volunteered or contributed in many other ways.

After eight years of planning and three years construction, the twin trails were opened in 2013 by then prime minister John Key.

The Roxburgh Gorge and Clutha Gold have proven incredibly popular with locals who walk or cycle them regularly. Unsurprisingly, they’ve have also proven a hit with visitors whose experiences are made all the more memorable by warm welcomes in towns and rural settlements offering family run accommodation, cafes and shops. Orchard-gate stalls selling fresh fruit are a delicious bonus for those visiting in harvest season. 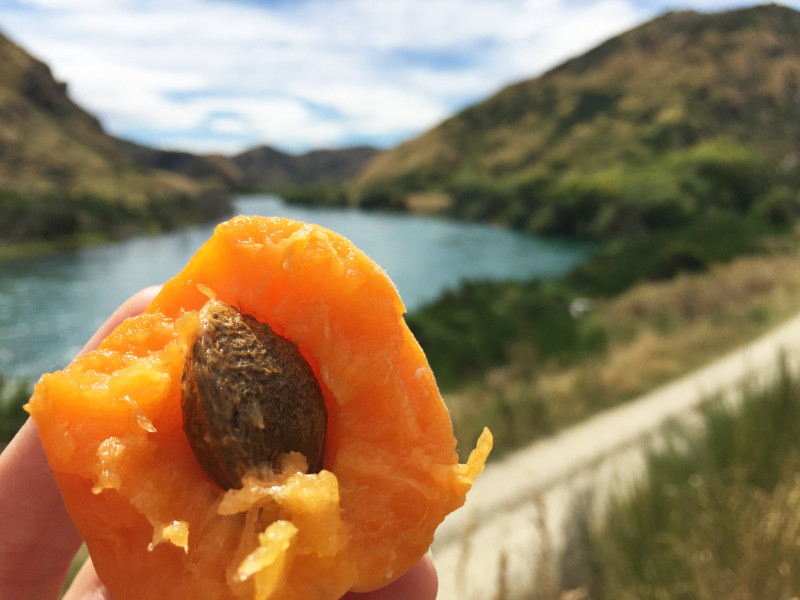 The Clutha Gold Trail is currently being extended from Lawrence down to Waihola, adding 63km to the ride and promising a future connection north to Dunedin.

Rod Peirce is excited about the expansion of the local trail network. ‘Within the next decade Central Otago will have one thousand kilometres of trail. It’s a never-ending dream for cyclists.’

How to ride the Roxburgh Gorge & Clutha Gold Trails

The fantastic and free Great Rides App helps you pick, plan and plot your biking adventures. This App has been created and updated by mapping expert and mad-keen cyclist Gary Paterson – it's free to download and is a New Zealand Cycle Trail national partner.