Community planting on the Motu Trails

Community and cycling come together on the Motu Trails with a series of eastern Bay of Plenty planting programmes that are helping restore precious dune ecosystems back to their former glory.

2022 is a big year for this Great Ride as it has celebrated its 10-year birthday, although that’s not the only milestone reached. Since opening in 2012 around 30 community planting days have seen more than 27,000 trees and plants dug in along the Dunes Trail section near Ōpōtiki.

Trail manager, Jim Robinson, has been stoked with the enthusiasm and generosity of local volunteers who have carried out most of the mahi. ‘A big thank-you to the 35 people that turned up to help recently – not bad for a town of under 10,000 people. We had so many helpers that all of the work was completed by just after 10am, the official start time!’ 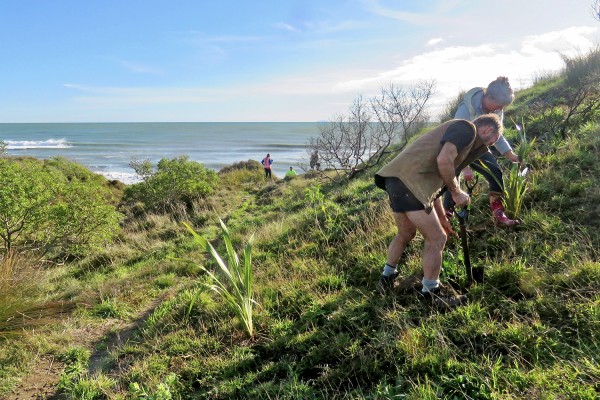 Volunteers dig in plants along the Dunes Trail in June 2022 (Jim Robinson).

This year, in partnership with local iwi-based project Whakatōhea Tiaki Taiao, and supported through DOC community partnership funding, the trail has rolled out the first stage of a predator trap line along the dunes. Plenty of rats and mustelids have already been caught.

All this environmental restoration work, and track resurfacing currently underway, means the Dunes Trail will be in tip-top shape for spring and summer. It will also link up with the brand-new 12km section west of Ōpōtiki, which is nearing completion. Keep an eye on our Facebook page for news on the official opening. 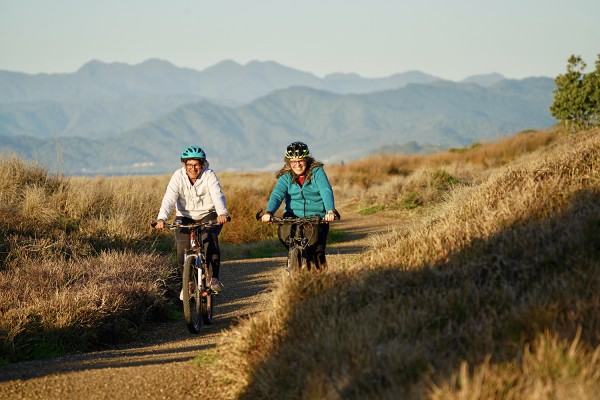 Other great news for the Motu Trails is the completion of the coastal Waipaoa River trail, resulting in a much more enjoyable (and safer) ride into or out of Tairawhiti Gisborne at the end of the Rere Falls Trail Heartland Ride.

You can find out more about the Motu Trails and plan your eastern Bay of Plenty’s biking adventures here.

Success stories you can spot along the regenerating Dunes Trail

Two planting successes along the length of the Dunes Trail are Waiū-atua and Pohuehue. Both the species are now thriving and easy to see as you cycle or walk the trail.

Waiū-atua is a perennial herb that grows multiple stems with blue-green foliage and deep-red flowers. The species doesn’t look local but is it is indeed endemic to New Zealand and the Chatham Islands. Translating loosely as ‘milk of the gods’ because of its irritating milky white sap, it is used in Rongoa, traditional Māori medicine, to treat skin diseases.

The plant is classified 'at-risk/declining', mostly due to grazing by cattle, sheep and rabbits, and habitat loss from development and erosion, plant disease and competition from introduced grasses. Until recently it was completely absent from the area. A lot has been planted and is growing so well, that there may well be more Waiūu-atua alongside the Dunes Trail than any other single area in the world! 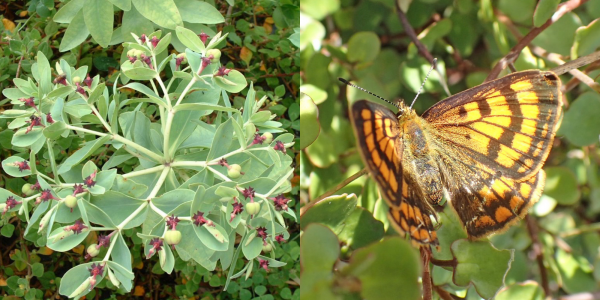 Pohuehue is a twisting vine that produces a dense tangle of stems with tiny leaves and flowers. It provides an excellent habitat for birds, lizards and insects, including the little coastal Copper butterflies, you may see flitting about and summer. By stopping grazing, minimising tracks through the dunes and controlling weeds, the Pohuehue is recovering superbly along the trail.

Much of this coast was once covered in forest, mostly low lying, but also including big trees like pōhutukawa. pūriri and karaka. The vision is to restore the environment to something like it used to be, with the following species selected for their resilience in this harsh coastal environment.

Ngaio is a tough, salt-tolerant tree found nationwide in coastal areas and low-lying forest. It grows up to 10 metres tall, with white flowers spotted with purple, and pretty purple berries.

Taupata is common around North Island coasts, forming a small tree or, in windy spots, a gnarled shrub. It’s also called the mirror plant due to its thick, high-gloss leaves, and produces red-orange berries – great for attracting birds. 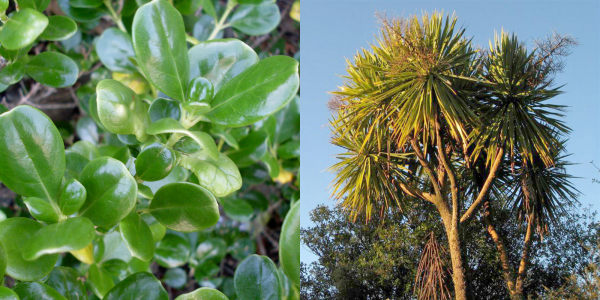 Karo grows around the North Island and can reach 10 metres in height. It’s another extremely tough species withstanding long dry summers and salty winds, and has crimson coloured flowers and large seed capsules that open to reveal sticky black seeds.

Tī kōuka (a.k.a. the cabbage tree) is one of the largest tree lilies in the world, reaching up to 20 metres high in favourable environments. Hundreds have been planted along the Dunes Trail.