A collection of murals dotted along the Hokianga end of the Pou Herenga Tai Twin Coast Cycle Trail share the stories of Horeke whānau.

Bringing colour to Northland's Great Ride between Horeke and the Utakura Bridge, the sixteen new murals were painted by 35 artists of all ages and abilities who came together to explore their artistic talent while sharing the stories of their connection to this place. Waka, manu, maunga and te moana are just some of the motifs that surface in the works, which speak to the wellspring of creativity that brought this community project to life.

The murals were created by Ngā Mahi Toi o Horeke, a collective established last year by Rawinia Le Noel who grew up around Horeke but now lives in Ngawha, just outside Kaikohe.

After returning from Australia where she lived for ten years, artist Rawinia was inspired to make a contribution to her community. ‘An art project seemed like a good way to create connections, weave our people together, to instil some pride and a sense of belonging.’

Rawinia’s initial idea was to set up a gallery in Horeke’s whare waka to showcase local art, but she soon turned her focus to the community hall, which wasn’t being used very much. She then put a call out on the community Facebook page to see who might like to join her in a collective art project. 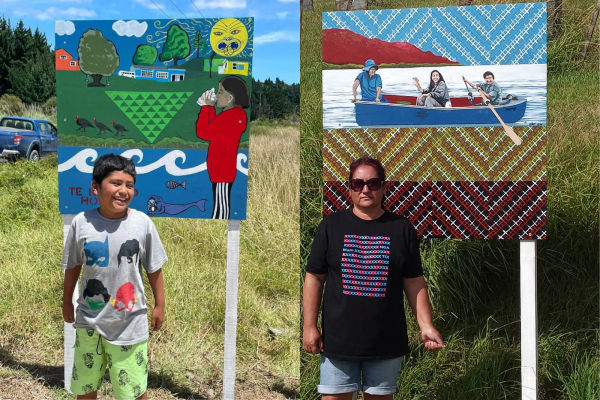 Left – Levi Le Noel beside 'Te Kura o Horeke' mural; Right – project kaimahi Rawinia with her work, ‘Hapanga’, capturing te taiao and her whānau fishing on the Hokianga Harbour, and a way of life many in Horeke can relate to.

‘It was open to everyone who wanted to be creative. There are plenty of talented people around Horeke. All I needed to do was bring them out of the woodwork.’

And so they came, around 35 artists including all 21 pupils of Te Kura o Horeke, at the local primary school.

Rawinia says that in order to make an impact, their first project had to be realistic in terms of time and resources. ‘The idea of an outdoor exhibition along the cycle trail was perfect as it meant our art would be seen by locals, and visitors from all over the country. More importantly, though, expressing our turangawaewae on the trail would help foster our sense of kaitiakitanga over it.’

Gathering for weekly sessions in the Horeke Hall during the second half of 2021, the group was joined by other locals who would drop in for a cuppa and kōrero and check out progress on the artworks.

Firstly, however, the artworks were exhibited at the Horeke Hall as part of a whānau day early December last year, which also featured local musicians, marae games, and a Christmas parade. ‘It was such an uplifting day for us,’ says Rawinia. ‘It was such a success in creating community spirit and building excitement towards future projects and events.’

In late January, with Christmas festivities and school holidays over, installation of the murals began thanks to a band of locals who turned up to help with the mahi. 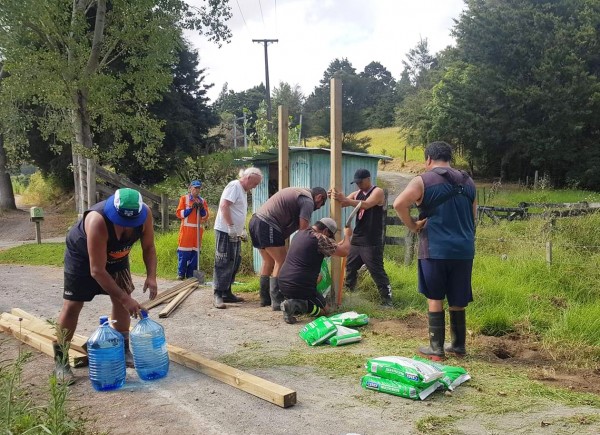 The sixteen murals can now be seen along the trail between the Utakura Bridge at Mangataraire, and Mangungu Mission Station at Horeke where the trail ends.

Rawinia says the project could not have happened without the support of the Horeke Community and sponsors. The Far North District Council’s Creative Communities Scheme and the Kaikohe–Hokianga Community Board contributed to costs, with Te Kura o Horeke and NorthTec Raumanga supplying resources.

Ngā Mahi Toi o Horeke is now supported by a small committee and continues to meet in the Horeke Hall where the next project is underway – a series of painted, glow-in-the dark tukutuku panels due to light up the night for Horeke’s Matariki Ball on June 24. 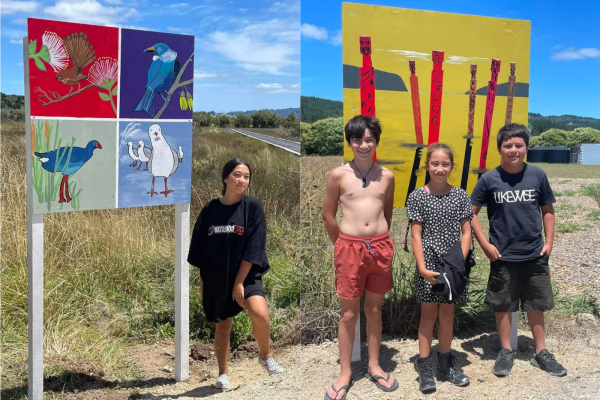 For Rawinia, it’s important that this momentum continues as the benefits go far beyond the murals themselves. ‘Many of our community members didn’t realise their artistic abilities,’ she says. ‘But we’ve also seen how art can build self-esteem in our children and young adults and improve our struggling community.’

While the murals have undoubtedly elevated the Pou Herenga Tai Twin Coast Cycle Trail experience for visitors, they’ve also served to create a closer connection to the trail for locals, many of whom use it regularly for walking. ‘When the trail came here, it felt a bit foreign. Now that we’re telling our stories alongside it, it’s become personal.’