Left to right: Elisabeth on top of the world; Garth rips through the woods (images supplied by Elisabeth Easther).
Find Your Ride / 23 Great Rides / Great Lake Trails / Riding the pumice path in Taupō

Riding the pumice path in Taupō

Elisabeth Easther cycles Taupō’s trails despite the rain. When it rains, it drains; that’s what I’d heard about Taupō’s Great Lake Trail.

And the reason for the excellent drainage? Much of the trail is built along the rim of a super volcano and, as a result, the base is predominantly pumice. In order to test this theory, I visited the central North Island during a not so clement patch of weather.

Overnight, rain thundered on the roof of Whakaipo Lodge. Thankfully it cleared in the morning as lodge proprietors Garth and Angie London drove us to the start of the first section of the trail – to Kinloch along the Orakau Track. Because this is a Grade 3 trail, I enlisted Garth as my guide.

With him calling out steep sections, sharp turns, low-hanging branches, narrow bridges and other hazards, I could ride with confidence and let rip when it felt right. At the trailhead, the heavy rain had rendered the bush more dramatic. Charmed by the myriad shades of green, we stopped at the Orakau Wetlands to be enveloped by nature.

Then we got going, whizzing along beautifully crafted trails, grinning like loons, full of admiration for the trail builders. Their work is the marriage of art and engineering, science and imagination; what delightful rides they’ve made. I loved the soft carpets of cabbage fronds and the sections plastered in pine needles the colour of orangutans. At Morepork Gully we paused to marvel at Karangahape Bluffs – at 400m the highest cliffs on the lake.

We pressed on through bush as dappled light filtered through the branches and flashes of my companions’ bright jackets strobed between trees. Over boardwalks and along single-track trails we raced, such graceful undulations and fluid curves, until eventually we emerged at Kawakawa Bay. I was quite surprised to arrive at Kinloch Marina because all day it’d felt as if we were deep in the country. We took a break at The Tipsy Trout for coffee and giant slabs of cake and, fortified, saddled up for our second leg, a 15km ride from Kinloch to Whakaipo Bay.

Climbing out of Kinloch, switchbacks led us higher and higher as we ground our way up the rim of the ancient volcano. This portion of the trail was just as delightful as the morning’s ride with more thrills and hills, a few roots and rocks, until eventually we popped out at Whakaipo Bay where Angie was waiting to return us to the lodge for pizza and pinot. 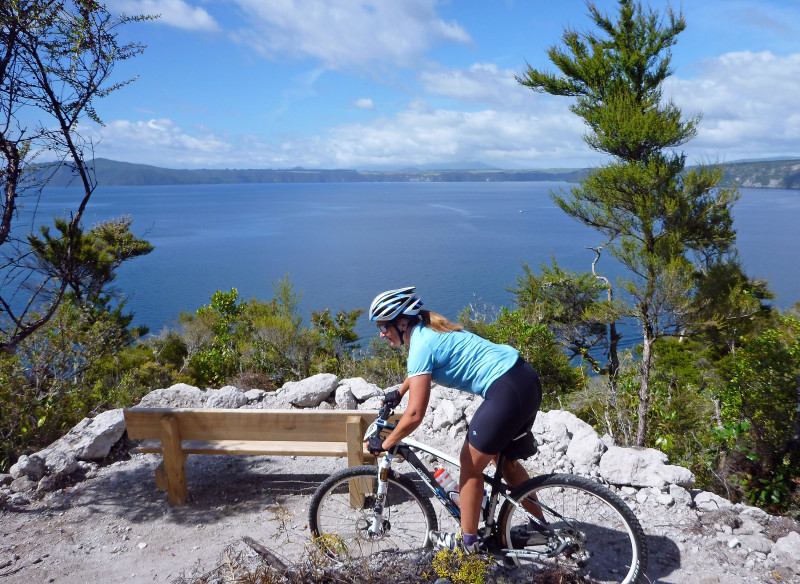 How obliging of the weather to rain all night then clear for the day’s activities, and day two saw that pattern repeated. Once again, Angie dropped us at the trailhead at Waihāhā River to tackle the Waihoura Bay Track. The weather adopted a misty sort of mood and we were unable to complete the full segment but the trail was memorable for beautiful bridges, larch trees and the thundering Waihāhā Waterfall. By this stage I felt more than capable of riding independently; day three saw me tackle the 15km Tongariro Trail from Koura Street car park.

Following the river, this is a mostly simple single track and, aside from a small handful of gnarled roots, it’s an easy ride that never exceeds Grade 2. I encountered several happy families along the route as well as a number of anglers hopeful of landing a trout. With the soothing sounds of water running over rocks, the distant glimpses of snowy mountains lent the landscape an air of majesty.

And to ice the day’s cake, while taking a breather beside the river, I spied a rare whio – the New Zealand blue duck. Too soon it was time to head home but before I did and, in spite of the weather having taken a torrential turn, I made a quick inspection of The Lions Walk.

This 10km boulevard starts at Taupō Boat Harbour and ends at Five Mile Bay. A wide concrete path, it follows the contours of the lake and being entirely Grade 1, it’s perfect for all ages. Yes, it might’ve been more enjoyable on a sparkling day, but having the lake to myself was a treat. I could just make out the suggestion of an island and one game kayaker who quietly paddled across the lake’s ruffled surface.

Completely saturated, but satisfied, I headed home via the Wairākei Thermal Health Spa. Shivering with chattering teeth, I hotfooted it through the frigid air to immerse myself in the healing hot waters. Embraced by billowing clouds of steam, the surrounding eucalyptus trees bowing in deference to the elements, it was a fine finale to a wonderful adventure.

AA Traveller are a Ngā Haerenga New Zealand Cycle Trail National Partner. Their Cycling Must Do’s Guide features all the Great Rides as well as many others (also available in print from AA offices and i-SITEs). You can also browse all sorts of cycling stories on their AA Directions online magazine.