Bringing you the very best short cycling films from around the world, the annual Big Bike Film Night is must-see for lovers of biking, adventure, film – and all the thrills you get from big-screen cinema.

A highly entertaining evening for movie fans of all ages, New Zealand’s biking film festival tours is touring the country, from the end of April to the end of June, where it’s set to pack out cinemas big and small. Early screenings around the capital were so popular that additional dates have been added!

Ngā Haerenga Great Rides of New Zealand are proud to be presenting partner of the Big Bike Film Night. Purchase a ticket to any New Zealand screening and you’ll go in the draw to win one of four epic Great Ride holidays, including the Grand Prize, which includes return flights for two to Queenstown, biking the Around the Mountains Cycle Trail, and more! Entrants also get the chance to win holidays on Taupō’s Great Lake Trails, Timber Trail and Mountains to Sea Ngā Ara Tūhono cycle trail. Find out more about the competition here.

The Big Bike Film Night started life as a fundraiser to repair Taupō’s super-sized bicycle sculpture, which was vandalised back in 2014. Festival founder Brett Cotter thought he was organising a simple film screening for a good cause. Little did he know that his Big Bike Film Night would gather so much momentum and go large!

Nearly a decade on, the Big Bike Film Night has earned a dedicated following and the support of film makers, film production companies and other organisations including Ngā Haerenga New Zealand Cycle Trails, the festival’s presenting partner. 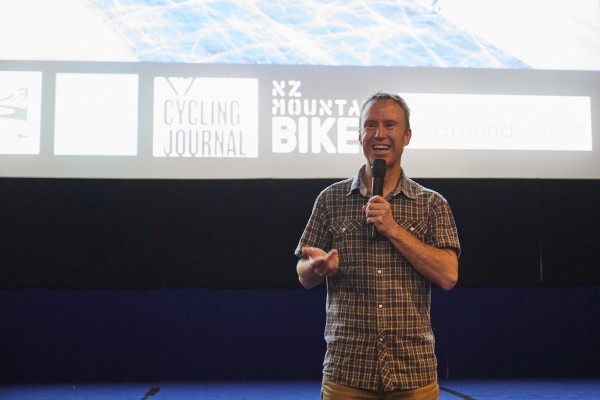 Brett still curates all the films each year, and does his best to ensure the programme has a bit of everything – action, drama, humour and more. He says it pays to keep an open mind when it comes to the subject matter. ‘It’s not all about two wheels. It can be one, three, four, BMX, gravel, cycle touring, bikepacking – you name it. The Big Bike Film Night presents cycling in all its shapes and forms.’

The programme is similarly diverse when it comes to film genres too, featuring everything from action documentary to animation. ‘Filmmakers are using such a staggering array of techniques,’ says Brett. ‘It’s mind-blowing to see the range and scale of what they’re doing.’

For Brett, the best films are those that tell a good story. ‘I’m looking out for entertainment, originality and creativity, of course, but it has to feel authentic. I particularly love films that celebrate the human spirit and inspire people to get out and ride.’

The 2022 Big Bike Film Night screens across New Zealand towns and cities through to the end of June. Check the website for scheduled dates, and those for Australia, Canada and Scotland.

Hear Brett Cotter talk about the Big Bike Film Night in this episode of the Pedal On Podcast.