Jim Robinson is a veteran cyclist and journalist who lives in the Eastern Bay of Plenty. He’s been involved with the Motu Trails since 2010, working as the trail manager responsible for everything from maintenance to marketing and working with the trail community. When asked to share a tale or two about the trails, he replied that there was only way to get inspired – ‘I decided to get my bike out and let the ride speak for itself.’

"SOON AFTER SUNRISE ON 5 SEPTEMBER, Ōpōtiki’s Dunes Trail was beautifully chilly. There was a touch of frost. Waves slid onto the sand rather than breaking. The early sun dazzled over the mighty Raukumara range.

Every time I ride the Dunes Trail I think about environmental matters. That’s because much of the way you’re surrounded by regenerative plantings of ngaio, tī kouka, taupata, and more. Regular planting days are an integral part of the trail, with community support growing stronger every year. In August, DOC announced community partnership funding for predator trapping, helping us take another significant step in restoring this special coastal environment. The easy 10km trail rolls up and down the dunes, with most of the rises throwing up an ocean view. Out on the horizon lie Whakaari (White Island) and Moutohora (Whale Island). This morning, like most, the beach stretches for kilometres completely empty of people.

Reaching Waiwhero, near the end of the trail, there’s a new shelter and a pou whenua (carved pole). While the Motu Trails Charitable Trust led the project to erect these, we couldn’t have done so without a power of volunteer support and a hugely generous donation from Garth Barfoot. As you cycle any of the Great Rides, always remember that every seat, every bench, shelter and bridge has a backstory – people making things happen.

The new shelter is the common turnaround point for Dunes Trail riders, but if you’re heading on to the more challenging parts of Motu Trails it’s the point where you leave the ocean for the forest. Everything changes.

The second of the Motu Trails trio, the Motu Road is an epic cycle journey. Opened to vehicles in 1914, for its first 15 years it was the only way to drive between Ōpōtiki and Gisborne. Winds over a series of hills, it’s 65km long, of which 48km is gravel. An e-bike removes the sting, as does catching a shuttle to the highpoint.

Around an hour and a half after leaving the coast, I reach one my favourite sections of the Motu Trails – the Toatoa Valley. This elevated valley was cleared for farming in the early 1900s, but the forest is well on the return. Toatoa’s post office, school and dairy factory have long gone, and most travellers pass by the old community hall without knowing it. Had the dice rolled differently, Toatoa would surely have boomed. Fortunately, it became a place time forgot. 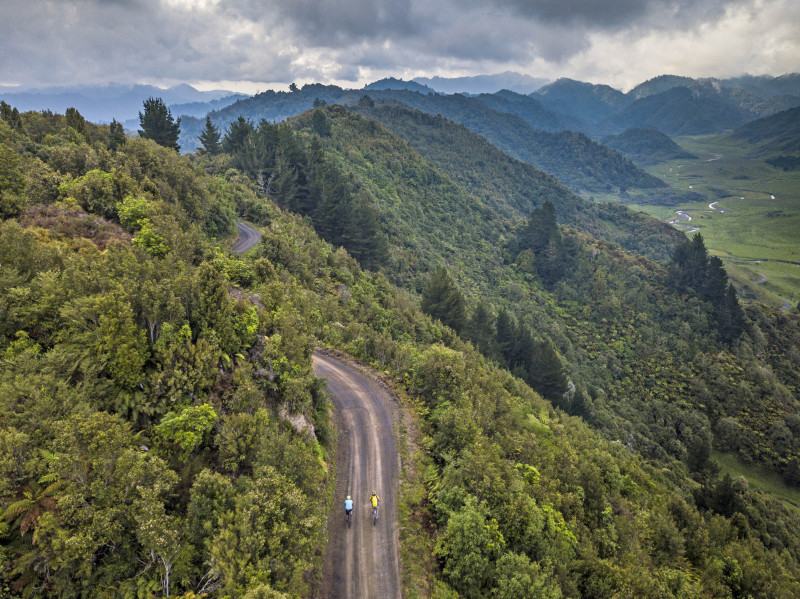 After a lot more climbing and an invigorating descent, I’ve reached the top of Pakihi Track. Although the road continues on to the tiny settlements of Motu and Matawai, today I’m heading back down this historic, 20km-long track. There are no more big views. The forest pushes in.

Pakihi was cut through with big dreams in the early 1900s. The initial plan was to link Ōpōtiki to Motu – and the Gisborne–Moutohora railway – with a coach road. But that was never to happen. In 1918 a major storm saw the crucial Pakihi stream bridge wrecked. Within a few years, Pakihi was described as an ‘abandoned stock track’.

Around 50 years ago, New Zealand Forest Service track workers, trampers and hunters recognised the wild beauty of Pakihi Track and set about preserving it. Around 1990, mountain bikers joined them, helping to restore the track to semi-rideable condition. It offered an epic adventure well deserving of its status as a classic ride.

Pakihi was hammered yet again by a series of storms in the early 2000s, but reopened again in 2012 as part of the Motu Trails. 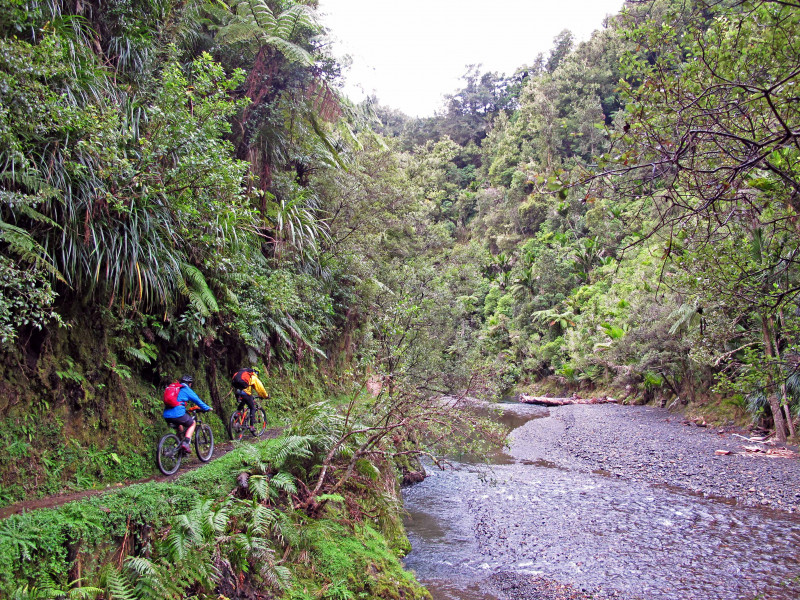 As I rode the track this day, it was rough in places requiring some walking and bike-lifting and a couple of scrambles. Although there’ll be a big maintenance run soon, you need to ride Pakihi knowing that small rockfalls are continual and windfalls regular. There are also big drop-offs to the side of the track. Pakihi is a stunning ride in wonderful forest but it needs treating with respect. That’s why it’s grade 4 (advanced).

At the end of Pakihi Track there’s a giant ‘PAKIHI TRACK’ sign, made of timber retrieved from an old bridge over nearby Te Waiti stream. Salvaged timber has also been used to build the huge table seating up to 20 people. I love these for the way they preserve local history, but also for reminding me of the 25 volunteers who came together to create them.

For more information, including how to plan your Motu adventure, click here.